In late February, a friend posted a flight deal on Facebook. It was only $500 roundtrip from SFO (San Francisco) to ICN (Seoul), with certain arrival/departing dates. For those unfamiliar, these flights are usually in the 800-900s from the west coast. My boyfriend and I were planning on eventually doing an East Asia trip (HK, Taiwan, Korea, Japan) later in the year, but this chance came up, and we went for it!
Sights
We only had about 5 days in the city, so we didn’t have time to go to Busan or Jeju Island. In Seoul by itself, there are not too many tourist attractions. There are a handful of busier shopping and food districts (Hongdae, Myeongdong, Insadong) which are must-sees. Hongdae is where young people go to hang out. There are a lot of restaurants and cafes, as well as bars and clubs. Myeongdong is similar to Hongdae, though it’s more for shopping. Insadong is the most touristy and pricey, but is very foreigner friendly. There are tons of souvenir shops and street food stalls. 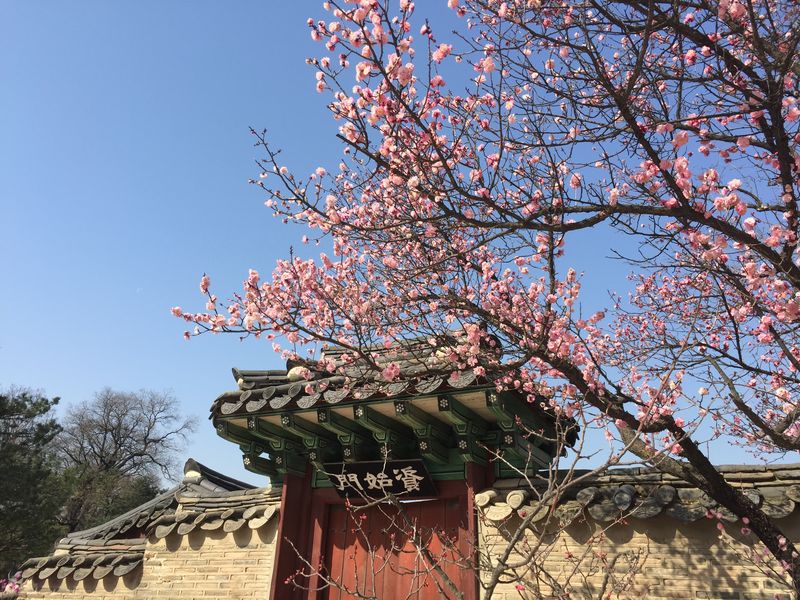 Inner Changdeokgung Palace
There are a number of palaces like Gyeongbokgung and Changdeokgung. We did Changdeokgung which is the smaller, and more quiet palace that allows you to explore freely. Gyeongbokgung is the larger and more popular one, though we didn’t have time to explore it. The Bukchon Hanok Village is surrounded by a fun shopping area. We happened to go when a large number of tour groups were going through, so it was quite noisy and difficult to get photos without other people being in the background.
The War Memorial was a very large museum that covered pretty much all of Korean history. It was huge and not very populated, so it was nice to go at our own pace and not be too bothered by other people. If you only want to hit one museum during your trip, this is the one to go to.
We didn’t go up the N Seoul Tower. Every city has some tower that gives you a view, but the view is not very worthwhile if you are unfamiliar with the city. Plus, we already had a cityscape view from our Airbnb which was on the 13th floor of an apartment building. Seoul is more of a city to hang out and explore normal activities. We were very lucky to come during spring time, when all the trees were in full bloom! Below is a photo of a normal side street lined with such trees. 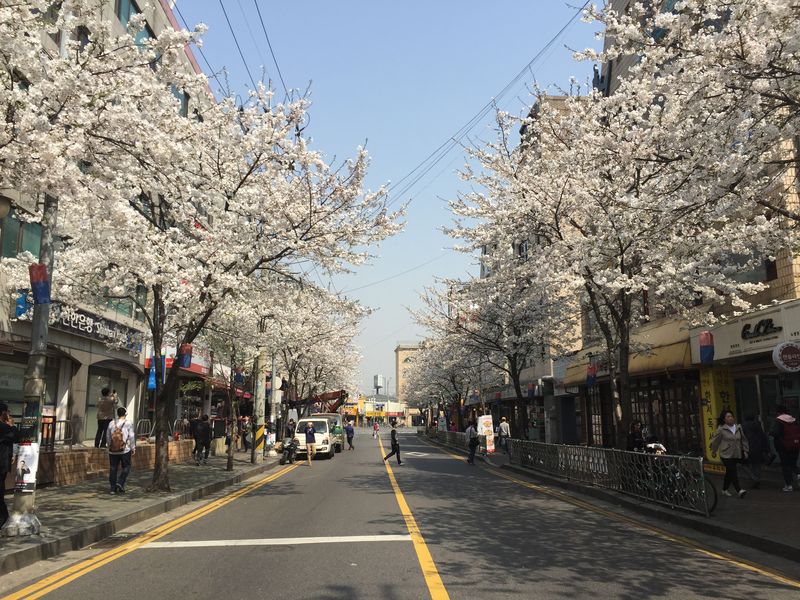 Crossing the street in Noryangjin
Culture
When on the subway or even when on the job behind a merchant stall (i.e. street food stands, convenient stores, retail clothing stores), everyone is on their smartphone in Seoul, doing one of 3 things - chatting on KakaoTalk, viewing Facebook or Instagram, or watching some Korean reality show or drama. If not directly looking at their device, they are probably on the phone with someone.
The age diversity is very spread out in Seoul. It was very refreshing because San Francisco (where I currently reside) is full of mid 20s to late 30s, you barely see children or older folks on the streets. Even in other North American cities, you don’t see a lot of seniors take public transportation, so it is a unique sight.
In large cities of America, you tend to see drug stores and chain restaurants most often (e.g. Walgreens, CVS, McDonalds, etc). In large cities of Taiwan and Japan, you tend to see convenient stores most often (e.g. FamilyMart). In Korea, there are as many skin care stores (if not more) than convenient stores. TonyMoly, The Face Shop, InnisFree to name a few. In Myeongdong, the shopping district, there are probably 3 or 4 of each skin care shop. It’s clear that Koreans take their beauty and skin care seriously. 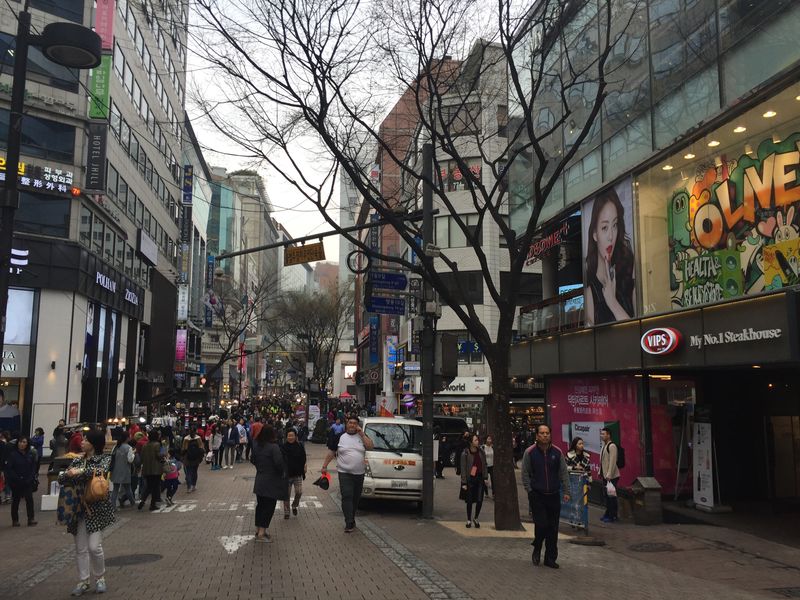 Shopping in Myeongdong
Infrastructure
Seoul is not on the population density scale of Tokyo, but it still tends to get quite crowded on the subways during peak hours. Even with the smaller population, the subway infrastructure is very impressive. It’s very cheap to get around compared to other large cities of the world. The only real issue we noticed was that Google and Apple maps did not really have transportation support for Seoul. Most of the time, the subway transit information was incorrect or outdated, or it would suggest bus options even though there were clearly more efficient subway-only routes. A separate metro app is often needed. Also, for restaurant recommendations, I would use Foursquare. Koreans actually use it! It was very useful for us to find even simple places to go such as parks or other hole in the wall places. Surprisingly Yelp is not used much in Korea, probably because there is a lot of friction to provide feedback about a restaurant on there.
Most people we saw were using higher end smartphones, particularly Samsung and LG devices. Cell reception and LTE speeds are lightning fast, phone calls work fine in elevators - surprising as a North American!
Fashion
Almost every young male or female was well dressed and wore make up (even guys wear makeup in Korea). This is a distinct difference from other east Asian countries I’ve been to - not to say Koreans look better, just that beauty is valued higher for an average Korean.
(Note that these observations are for young people around my age) Females love wearing short skirts. What seems to be currently popular for the younger, still in school females is the tiered skirt, while for older working females, it is the pencil skirt. I don’t recall many females wearing shorts. It is actually considered scandalous to show your shoulders, so you will never see people wearing just a tank top or sleeveless shirt. Most females will wear a fitting top and a skirt to show their figure. Then they pair it with a long trench coat jacket. They love wearing pink, beige, light blue, and grey, and stick to simple designs. I don’t recall anyone wearing bright colored clothing, which came as a surprise to me because of the way K-pop stars dress. Males like to wear fitted suit jackets, or just suits in general, even when they are just going on a date or hanging out with a group of friends on a non-work day. Both females and males will dye their hair some shade or brown, or keep it black. They like to wear white sneakers or heels.
The pricing of clothing in outdoor shopping districts or subway markets were very cheap, similar to other Asian countries. I didn’t end up getting too many clothing items, surprisingly I spent more souvenir money on snacks to bring home for friends and coworkers than clothing this time around. In the shopping stalls, you will often see cute character or patterned socks being sold for 1000 won. It seems to be a popular trend, being able to wear Totoro, Pokemon, Hello Kitty, Sailor Moon, or K-pop star socks. I did get a few, but regret not buying more! 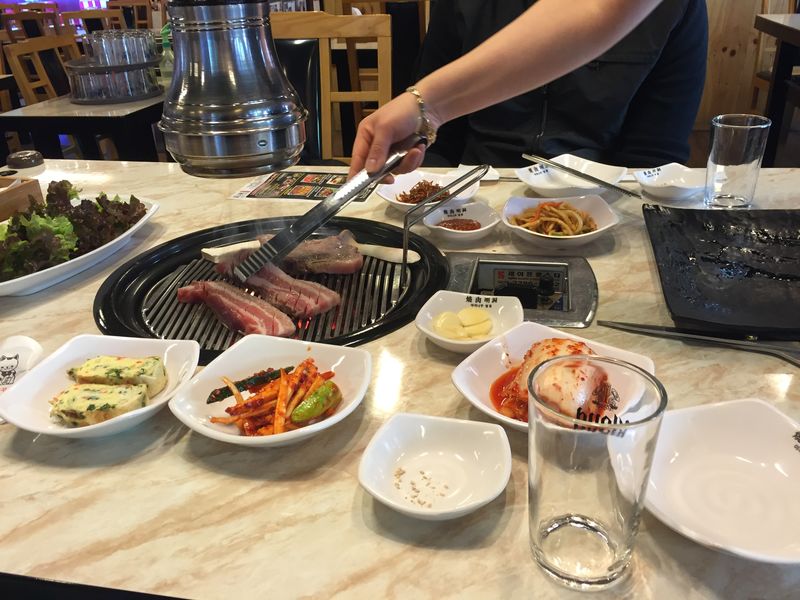 Korean barbecue in Myeongdong
Food
Koreans take their spiciness levels seriously here, so be wary! The spiciest thing I had was topokki (only 250 won), which had very delicious sweet sauce that turned out to have a very spicy after taste. We had Korean BBQ several times and Korean fried chicken twice. The Korean fried chicken (KFC) is unbelievable in Seoul - and we were very lucky to stay close to the well known worldwide chain, Kyochon. Both times, we had the honey wings - it seemed to be the most popular choice, too. I really loved that these wings weren’t as sweet as the popular American flavor, honey garlic. With KFC, hey use a very light batter and it turns out being very crunchy and delicious, not too oily or saucy. You are supposed to have it with beer and pickled radishes - a great combo that is pictured below. Korean BBQ was very good in Seoul and most of the time, they cooked and cut it for us since we are foreigners. It is arguably better than BBQ in Toronto and San Francisco, but matches Korean BBQ in LA and NYC. The stark difference was that the pricing is much cheaper in Seoul, you can usually pay just $10 USD per person. 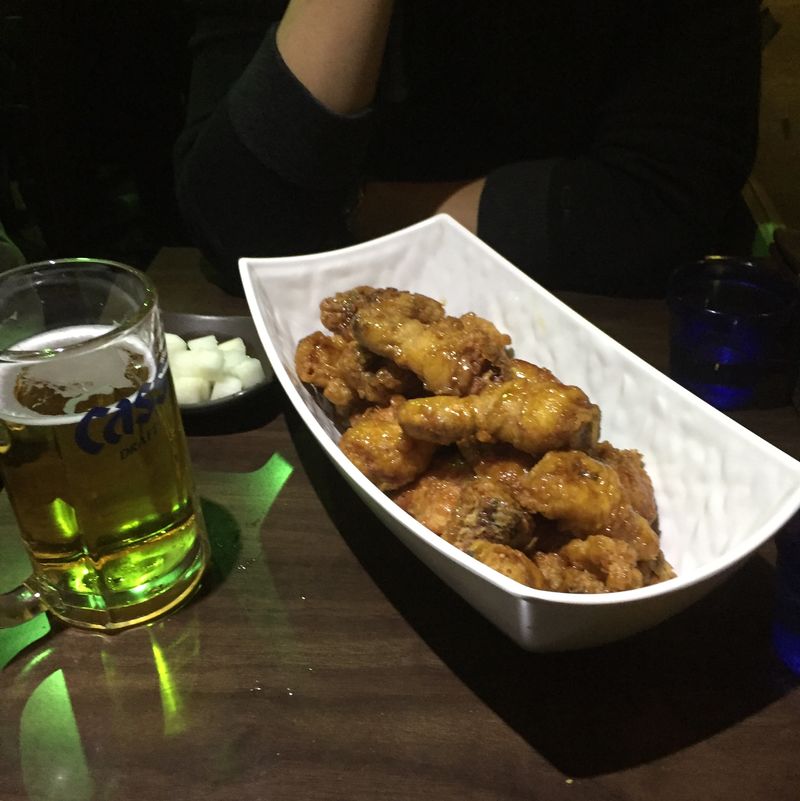 Kyochon honey wings in Hongdae
We also had some other misc dishes like dumplings, beef soups, bibimbap, tofu stew, and some random street food. In general, food is very cheap in Korea, and you can probably spend less than $10 for lunch and less than $20 for dinner for large portioned meals (similar to most Asian countries). We did run into a case of expensive beef soup in Gangnam, but perhaps Gangnam is just very pricy. We saw very few restaurants that served Gamjatang (pork bone soup) or jajamyeon (blackbean noodles). People seem to go with the stews, the BBQs, or go for a Chinese or Japanese restaurant instead. I can’t imagine having saucy or spicy food every day, so it makes sense to have cleaner food (sushi, curry, etc) once in awhile.
We did have “live" octopus as well. Ok fine, not live, but just cut up octopus with its tentacles still squirming around do to a reflex reaction. It still felt pretty live since they would try to suction onto the side of your mouth as you are chewing the pieces (make sure you chew if you ever plan to eat it or else it may get stuck in your throat!)
Desserts
Apparently strawberries are in season, because we saw almost every dessert or coffee shop have some strawberry flavored special. The strawberries were indeed fresh and very deliciously mixed with slushies and bingsu. I think Koreans love strawberries in their desserts as much as Taiwanese love mangoes. 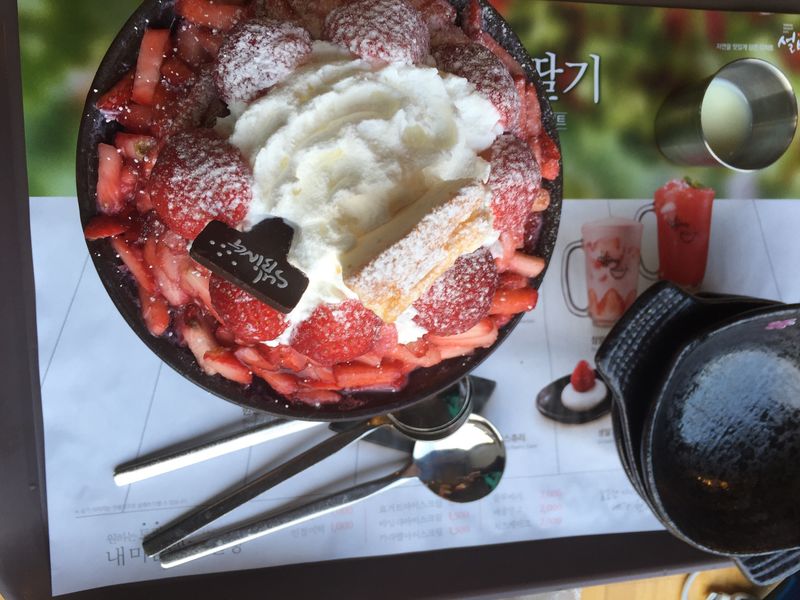 Strawberry bingsu in Hongdae
One popular Korean originated dessert right now is Bingsu, which is basically shaved snow (similar to Taiwanese shaved ice, but finer and softer on the teeth). We had it twice, the first time with strawberry + ice cream, then another time with the “original" red bean and cookie crumbs. Gelato is also pretty popular and cheap. 4000 won for a small iirc, cheaper and actually quite authentic.
Koreans love their coffee shops as well. Many of these coffee shops have a theme to them, often European inspired decor. We stopped by a dessert cafe with a garden theme. It had a greenhouse area with heat lamps and movies projected on the wall. They really go all out with the interior and exterior design!
There are also a number of special cafes like the Hello Kitty cafe, cat and dog cafes, and craft making cafes. We only dropped by the HK cafe for some photos (it was quite magnificent), but never went to the other specialty cafes. We also ran into a number of Gong Cha bubble tea chain shops during the trip. It was the only bubble tea chain we saw in the city, though we saw a handful of privately owned bubble tea shops. They price their items slightly higher than American pricing (4500+ won for each drink), so we never tried it. 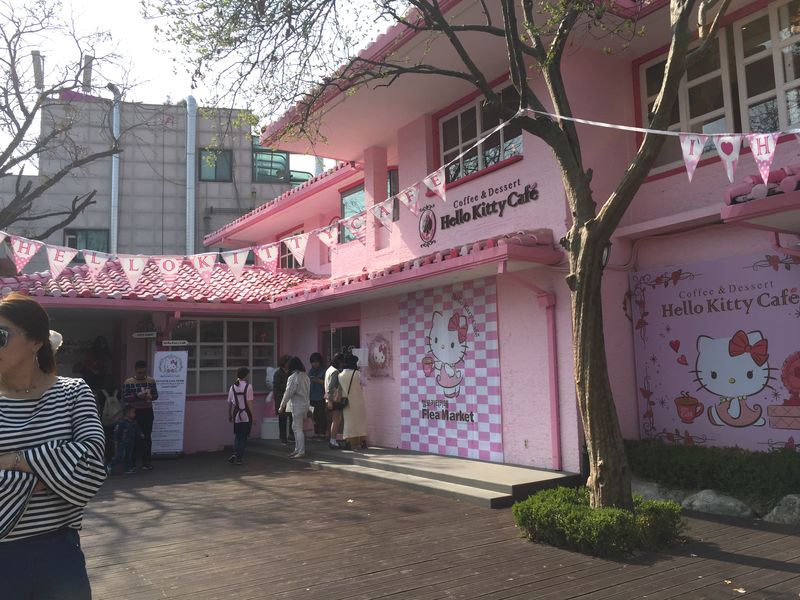 Hello Kitty Cafe in Hongdae
We concluded that overall, the food you can get from Seoul is not much different from the food you can get in other major North American cities, except for the fried chicken and the bingsu, though overall is much cheaper. The one thing we didn’t get to do was watch a K-pop concert in Korea, so it’s still on my bucketlist. I’m not sure the next time I’ll go to Korea, but it will likely be combined with a larger Asia trip.
comments powered by Disqus