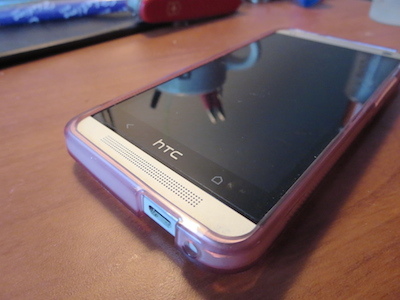 I got this phone back in October ’13. I had it for a couple weeks as my work phone last summer, and thought, I might as well get it as a personal phone. It took great front facing photos, but I never realized that the back facing camera had issues. It was only 4MP, and I know HTC added their Ultrapixel technology, but for most practical cases, it was useless. The photo quality was pretty terrible in low light, especially since I was part of the group who had the purple tint issue that was introduced sometime last year. Zooming in also produced bad quality photos, so I never ended up doing so. There was also another issue where the image would be stretched towards the bottom of the lens. I’m not sure if it was only on my device, and I never got it checked, but it was certainly noticeable.
Other than the camera, the photos and videos app itself was pretty cool. It would automatically create “moments" videos from the photos you took and put some music and filter on it automatically. I didn’t find any real use for it but the technology itself was interesting. There was also Zoe, which you can read more about here. It was another cool feature that I never really learned how to take advantage of because it’s not something you’d commonly want to use.
The build quality on the phone was amazing - beautiful display and a very sleek metal backing - no fingerprints! There are also from (very loud) front speakers. The speakers are pretty nice if you play music often without headphones, but it was pretty bad waking up to it as an alarm.
I had a 32 GB one, which was more than enough storage. Calling, contacts, messaging, and internet experience were all great. Plus there are a ton of replacement messaging apps and browsers you can download if you don’t like the stock one. The battery life was pretty great.
The Sense UI is actually pretty nice, although I always used nova Launcher. Blinkfeed and the HTC camera app is pretty awesome, too. I did try rooting it and flashing it at some point. My only motivation was to install a custom font. Funny thing was that the HTC Sense 6 update came with custom fonts, and it was too late for me to unroot and flash the stock back. I got lazy trying to figure out how to flash it back, so I just decided it was time to sell it. It was not in any way a bad phone, but the camera quality was enough for me to want a different phone.
So I got the S4, which is pretty much the same size as the HTC One except lighter, thinner, and more plastic. The camera is MUCH better, and the UI is noticeably smoother. Nova Launcher clearly wasn’t made for the HTC One, because I ran into lag issues from time to time. Some say that the colours on the HTC One are more real, since the S4 is Amoled - not a big deal to me as it’s barely noticeable, but it may be to others.
I certainly did love the Sense UI and the brilliant build quality, but I am happy to be back to a Samsung device for the time being. Plus, if you’re looking to get an HTC One, you should definitely go for the M8, which has even better build quality, and fixed camera issues.
comments powered by Disqus