Our last stop: London! It was great to be back in a city where the dominant language was English (with great accents). 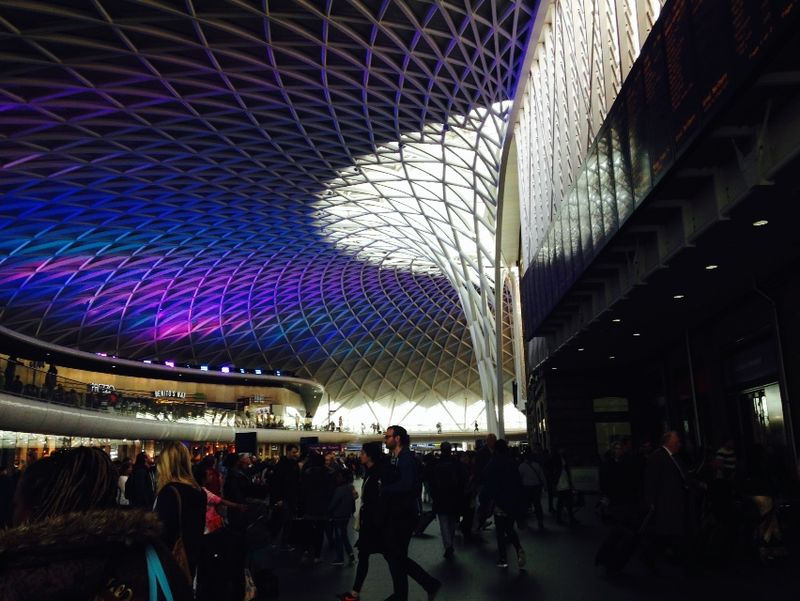 “Reverse waterfall that cascades over your head", King’s Cross railway station
We were greeted with this beautiful and modern railway station, King’s Cross (recently renovated). Our Airbnb was a 5 min walk away, making it super convenient to get places. Public transport in London wasn’t super cheap, £2.30 to travel within Zone 1 - the city centre, although it was only £6 to get to Heathrow on our last day (convenient, too, as it’s the last stop at the end of the Picadilly line). Food pricing was fair for the most part. I just tried to ignored thinking about the horrid conversion rate so I could enjoy myself. For those wondering, it’s 1 CAD = 0.53 GBP... brutal. 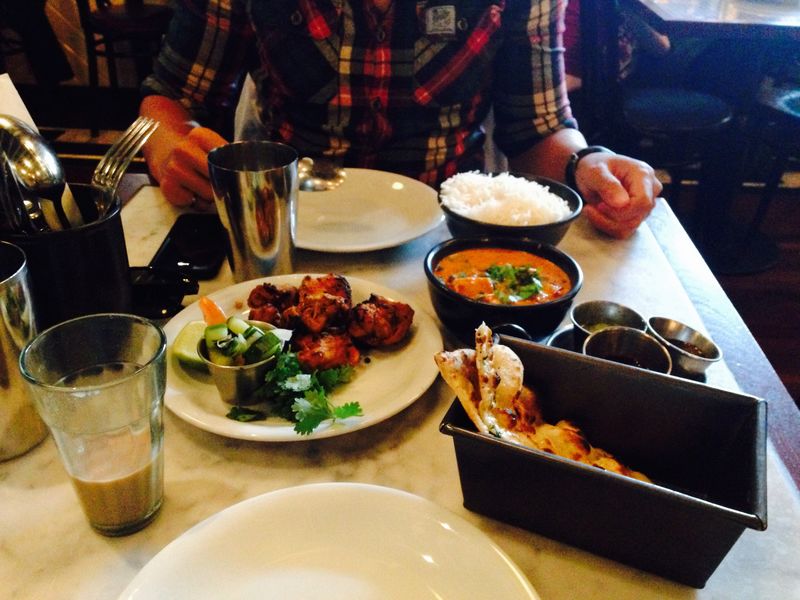 Chicken Tikka & Mattar Paneer, Dishoom
Nearby was this awesome fusion Indian restaurant called Dishoom - just opened last year. Very cool atmosphere, amazing Indian food with very reasonable prices, delicious cocktails. We went there twice because it was that good. We soon realized the London food scene was mostly ethnic and international - Indian, Thai, and Japanese.
There is an Asian inspired food chain called Itsu. I spotted at least 20 of these stores during our trip - they are everywhere - though their sushi didn’t taste that great. Busaba is a Thai restaurant chain which had very delicious pad thai, calamari, and curry dishes, though a bit pricey. There is a Chinatown in London - which made us realize London is very similar to typical metropolitan North America. 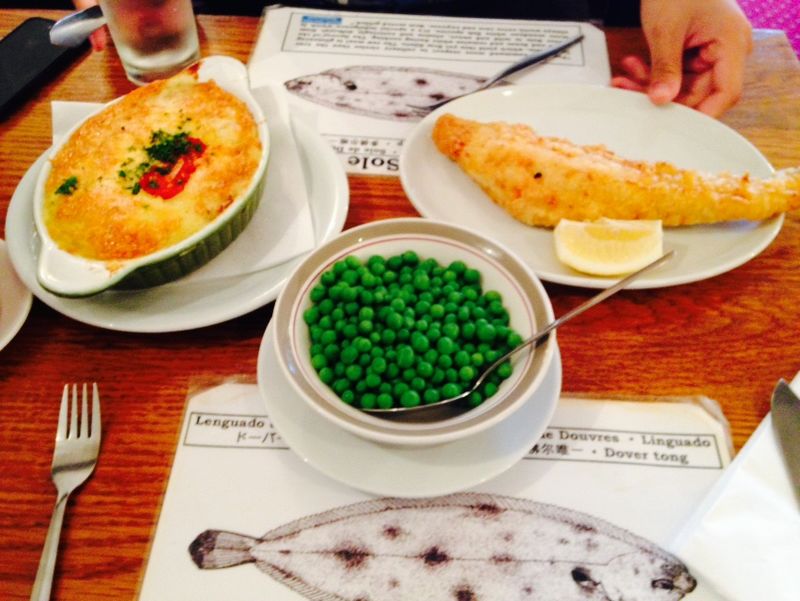 Fish & chips, North Sea Fish
But what is ethnic English food? Fish and chips! On on occasion, we had it in a sit down meal served with peas. The fish was delicious, and the chips were mediocre. I guess I’m not a fan of thick fries. We also had it to-go at Laughing Halibut, in the popular lunch grab & go area of Strutton Ground Market. 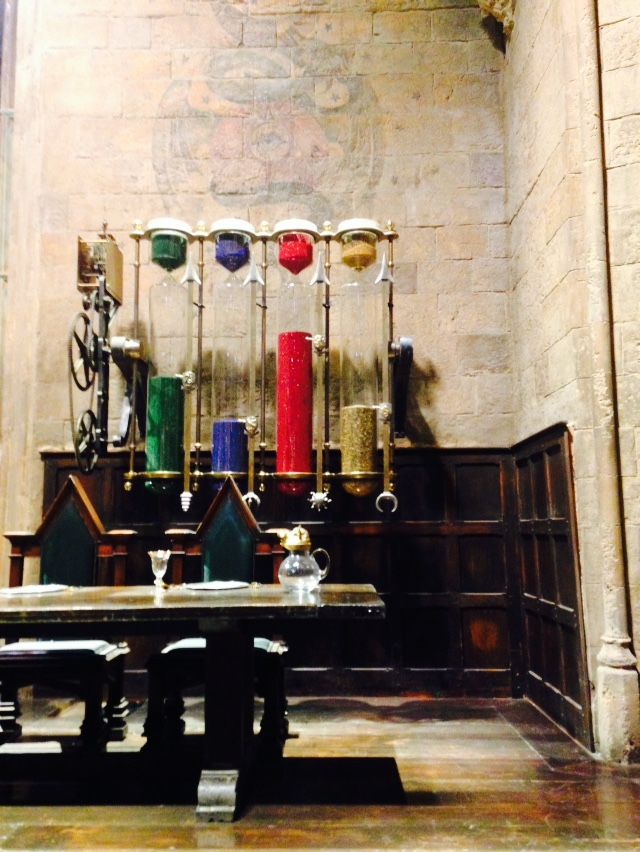 10 points for Gryffindor, WB Studio Tour
I somehow came across the Harry Potter WB Studio Tour while researching things to do in London. After reading a load of reviews, I thought, we definitely have to go here. We attempted rewatch all 8 movies to make sure our experience there was worthwhile (got through the first 6 before the tour). The Studio Tour takes visitors through the real sets and costumes used in the films. There was an immense about of tidbits and videos detailing each of the sets, it was pretty incredible. 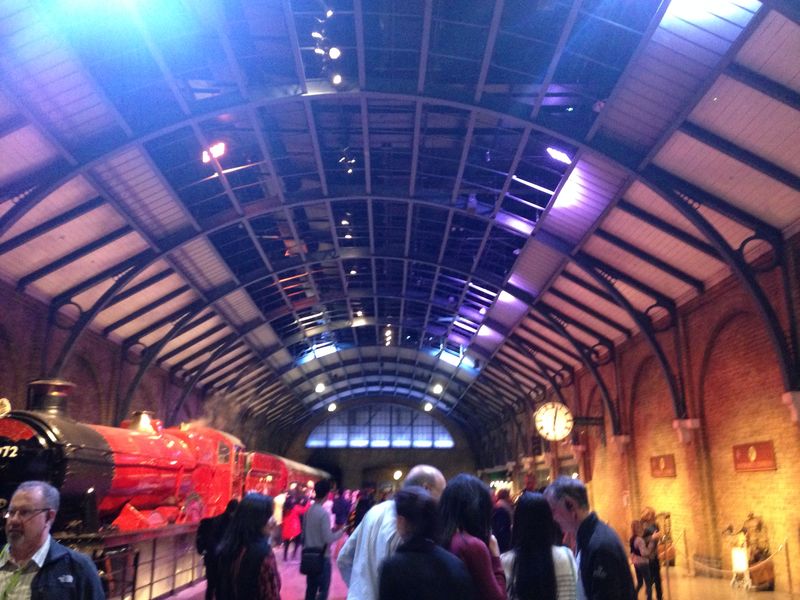 Platform 9 ¾, WB Studio Tour
There were tons of photography opportunities - they know what the fans love. It took us ~3 hours to go through the whole thing, we went at a pretty steady pace, too. There is a cafe area in the middle of the tour, though the only thing Harry Potter themed was the Butter Beer, which was literally just a rootbeer float which gave me a tummy ache due to the cream they used. The HP theme song was stuck in my head after that tour. 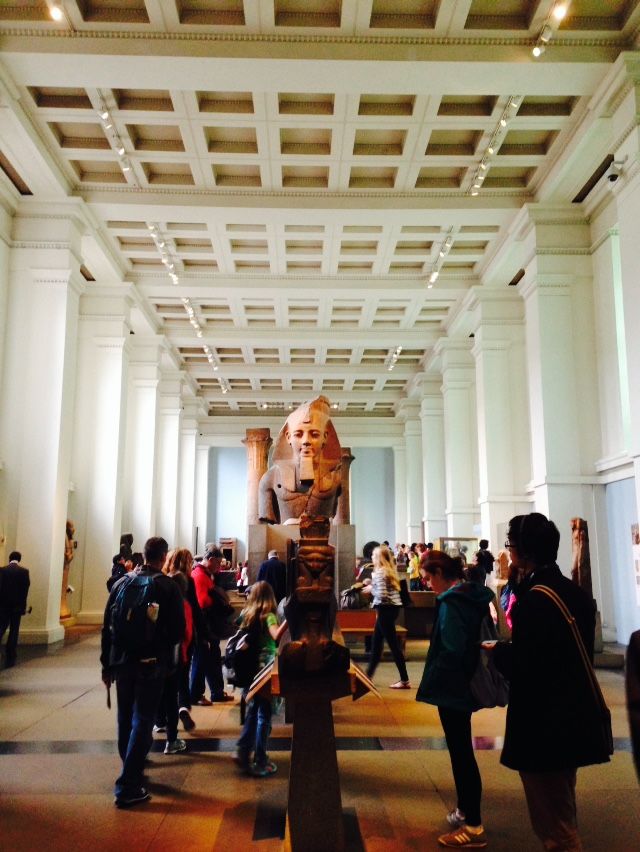 Pharaoh statue, British Museum
So what real sites did we actually see? Luckily there are a plethora of free museums in London. The British Library has a mini museum for literature, maps, and music all in one that was super interesting. Props to Rick Steves for the great audio tour. The British Museum has an awesome collection of Ancient Egypt, Greece, and Rome, along with sections for Asia (China, Korea, Japan), Africa, North America, … I am probably missing a few… but this place is gigantic - I still can’t believe admission is free. 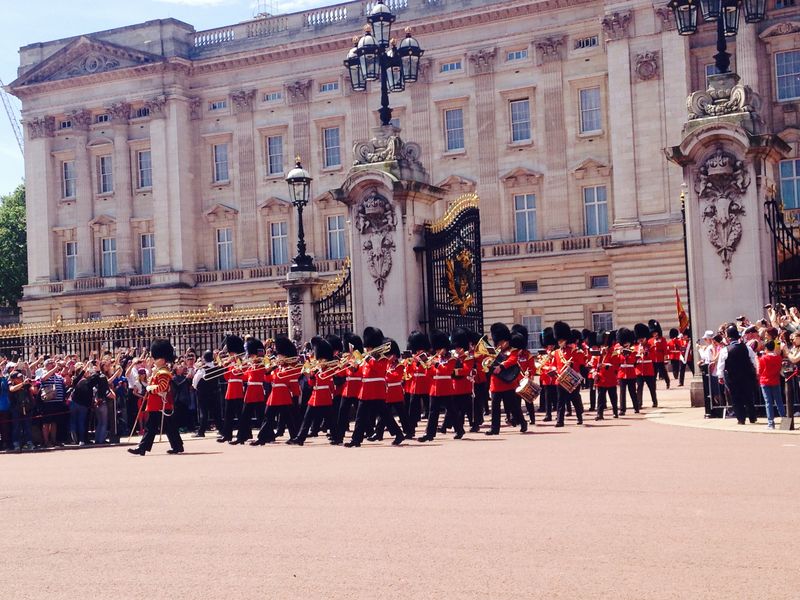 Changing of Guard, Buckingham Palace
More free sightseeing - changing of guard happens at ~11:15 until noon on most weekdays during dry weather. We got a pretty good spot to see it all happen. They even drove the Queen in since apparently she was hosting a thank you lunch for volunteers, so that was cool. 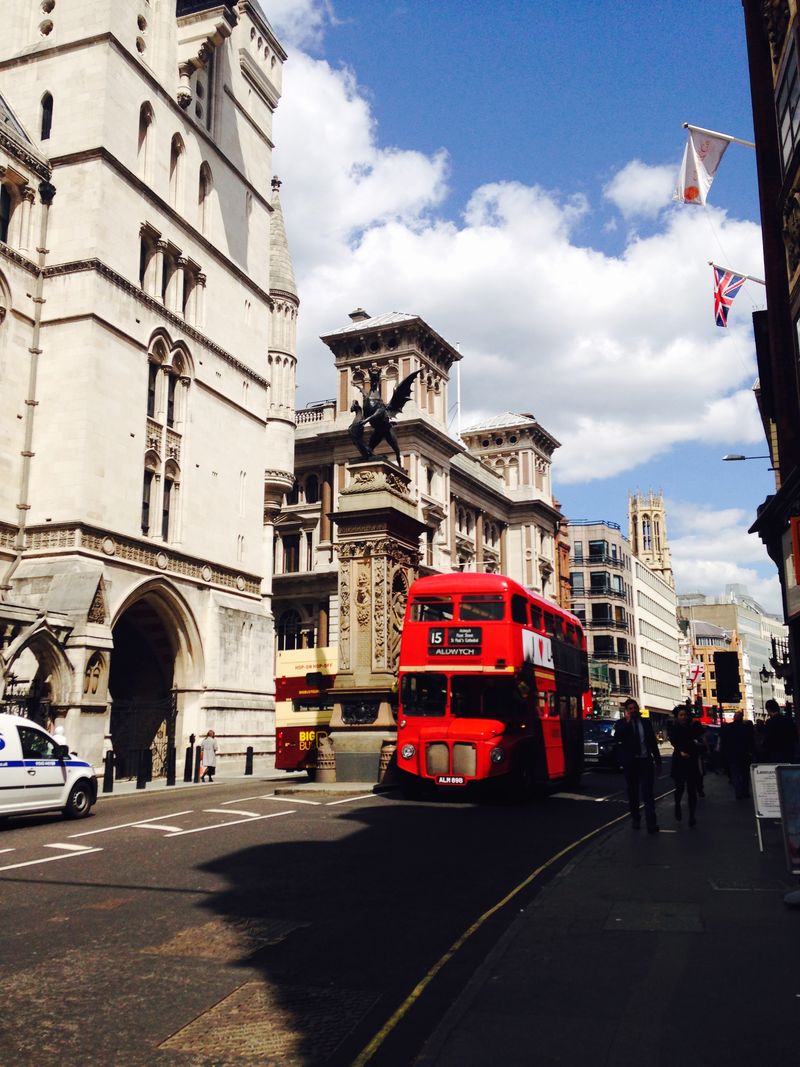 Red bus on the streets of Westminster
We went on more of Rick Steves’ city walks (London and Westminster), they were alright. Westminster walk took us through to see Big Ben and the London Eye from the exterior. There are also a few churches that are popular for sightseeing - St Paul’s in particular, though it costs a whopping £16 to go into. No thanks. (We had our fair share of churches for the trip, anyway).
On the first few days, it was chilly and extremely windy. Luckily on the last two days of our stay, we were given rare warm, sunny weather. 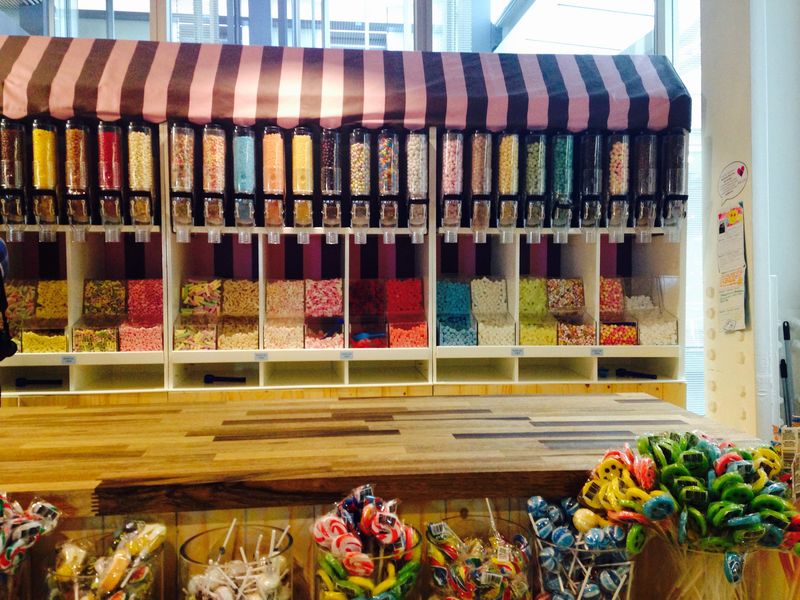 Sweet Stop, FB London
Of course we had to check out the FB London office (courtesy of our intern friend from last fall) - the major Facebook Europe engineering office. Holding 3 floors in the Euston tower offices, it felt very similar to the NYC and Seattle satellite offices. It has a nice view of the city, as well as its own cafeteria, coffee bar, and candy bar. With the pound doing well, a mediocre free dinner and snacks seemed fitting for our budget.
We went to the Hippodrome Casino on a few occasions as well (as it was so centrally located in the city, we thought, why not?). The security for the entrance near the metro station was very slack, while the one facing Chinatown was very strict, for those interested. The first time, we came out positive at £5 by putting in a bunch of our change. The second time, we came out positive at £110 with ~£6. We were definitely very lucky with the 25 pence slots.
There were a number of free wifi hotspots throughout the city, another reminder of how modernized and open the city is. Londoners were very friendly from our experience and it was a nice gradual transition back to Canada as our last stop in Europe.
comments powered by Disqus