Our time in Paris was veEry short - only 3 full days. We jam packed as much delicious food and sights as possible.
Parisian Food 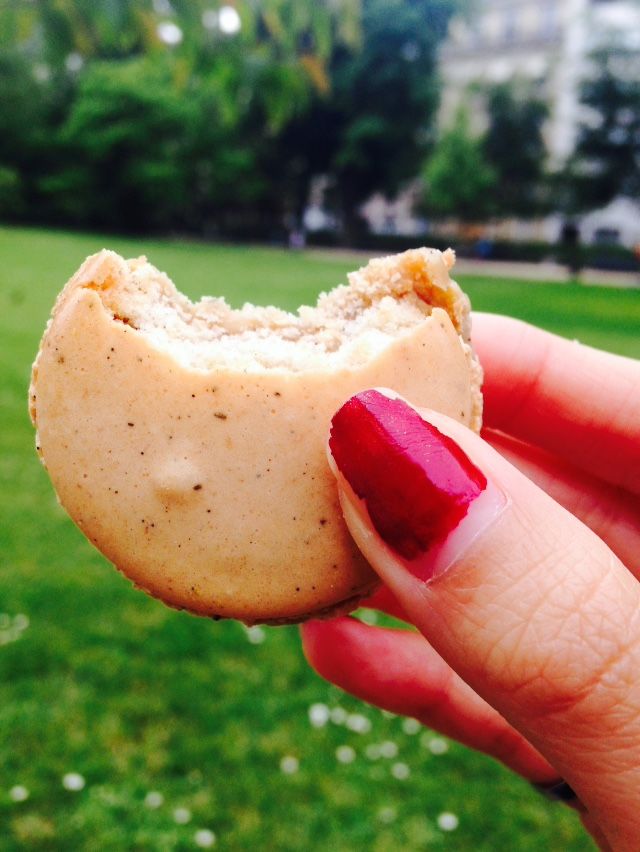 Vanilla flavoured macaron, Sadaharu Aoki
Paris food is delicious and reasonably priced. We were very happy to be able to eat out daily again after our lacking week in Switzerland. We had delicious falafel, crepes, croissants, baguettes, macarons and egg tarts as snacks; and great tapas, foie gras, beef bourguinon, and wine during our sit down meals.
We really didn’t have enough time and stomach room to enjoy all the food. Paris was similar to Rome where they start lunch and dinner at specific times. Parisians tend to eat dinner at later times (8pm+), though restaurants do not limit the tourists from wanting to eat at 630-7pm. There are a number of brasseries, too, for those who want to eat during the afternoon. 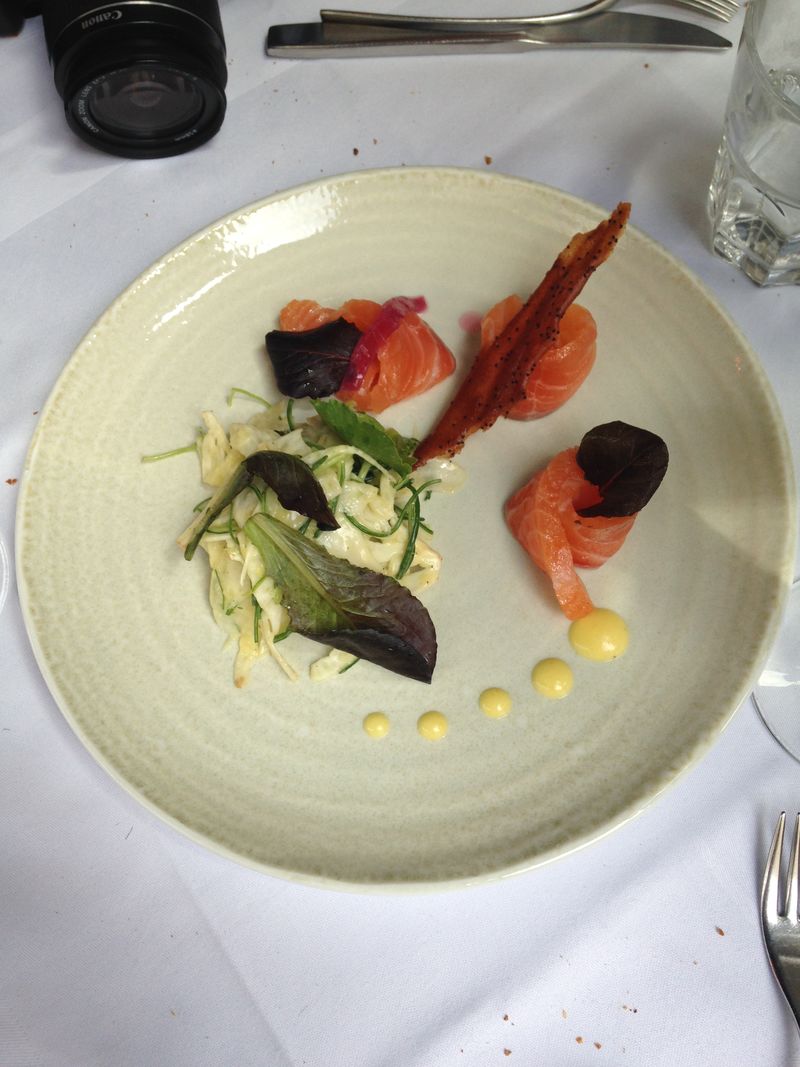 Salmon dish at L’epi Dupin, a gastronomy restaurant
Overall from what I found, the distinction from good to best with food in Paris is not that large. Hop in any Parisian restaurant, boulangerie, or brasserie and your cravings will be satisfied.
Observations
One thing that was cool about Paris: there are a ton of locals, even moreso than Rome. Paris is a huge city, many locals live and work in the city. It’s a mix between NYC and Rome, I’d say. The Metro system has good coverage and is very cheap. Paris is pretty walkable though, so we didn’t use the Metro too often.
Actually, we kind of avoided the Metro due to the fear of pickpocketers. We didn’t experience it, but there are a handful of them that you can identify. The city is more fast paced, too, so being alert and aware is important.
it seemed like all the locals smoked when we were in Paris. The air was definitely not the cleanest, so this is important to remember if you decide to sit outside for any meals and you are sensitive to smoking.
Paris had a huge diversity of travellers - Japanese, Korean, Chinese, Italian, French from other parts of France, English, American, the list goes on. The locals themselves are also quite diverse in colour, which was nice to see again after isolation in Switzerland.
The weather was great while we were there, mostly partly cloudly, though a bit chilly than we expected (usually around 18 celcius).
Sightseeing
We chose to get the 2-Day Paris Museum pass which allows you unlimited access to 60+ museums within the 2 days you activate it. It’s a great deal, but it meant we had to see everything within those two days. If you are into museums and art, definitely think about getting the pass (there are 4 day and 6 day passes, as well). If you want to see Paris through food and normal Parisian life, reconsider.
You might not even save that much money if you’re only planning to see a few sites & museums, especially if you pay student admission prices. At student admission prices, we saw:
Total = 61.5 - so we saved €19.5, and also skipped the line and hassle of buying tickets individually at each venue for most of the sights. The starred sights were the ones we wished to see most, which added up to 39 euros, close enough to 42 that we got the pass anyway. The pass makes you very ambitiously want to see everything (including others that weren’t as mandatory). Seeing many sights was doable with a small group, though not very enjoyable trying to rush from one destination to the next. 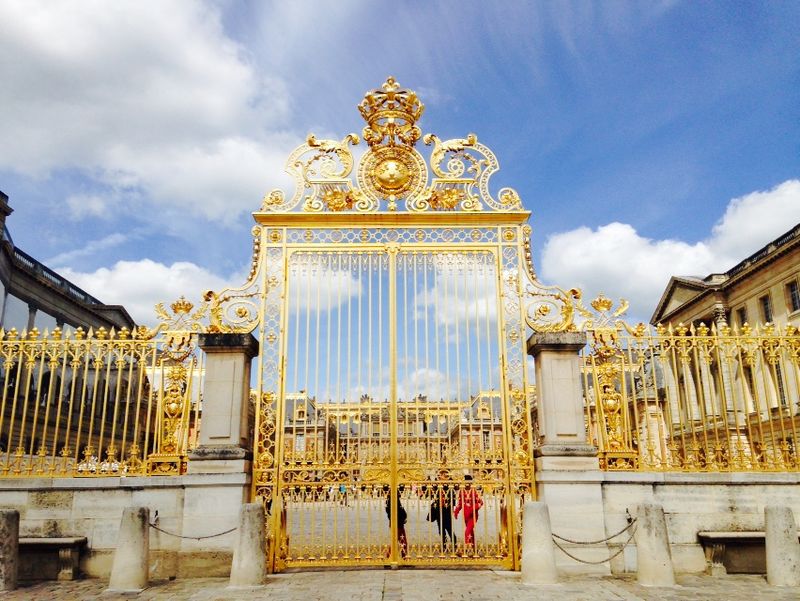 Gates of Versailles Palace
Out of them all, Versailles was the most overrated. It’s a gigantic palace located about an hour by train from Paris city centre. It’s easy to navigate once inside since you just follow the flow of the crowd - but it gets irritating. It’s too crowded and you can’t appreciate the rooms as much when there are so many people. The food in the cafes is pricier than Paris street food but not too terrible (still recommended to bring your own lunch). It was very underwhelming, and very similar to Doge’s palace and Pitti palace in Venice and Florence respectively, except larger of course. I enjoyed Rick Steves’ commentary about the history of the place, though. People say arrive early when it opens (around 9am). We arrived a bit late (11am) and had to wait for 1.5 hours even with the Museum Pass. I actually recommend coming here around 3-4pm to avoid the crowds completely. You will have plenty of time to see the palace and gardens.
The gardens of Versailles were very nice. Because we went on a Saturday, we had to pay to get in (7 euros) as they have the Musical Fountain Shows going on (check out their website for fountain show days). Basically the shows involve playing music (through speakers) as you walk through the gardens, and water shows at the multiple fountains. It was nice, I guess, but the gardens can be appreciated without the music and water shows, too.
Beyond the gardens are giant open fields and trails that are better explored on bike. We rented bikes to explore the end of the grounds - it’s pretty beautiful beyond all the tourist zones. Highly recommended over the tacky fake gondola lakes in the centre. Overall, I’d say skip Versailles if you want a real Paris experience, and only go if you have lots of time.
The Pompidou is a modern art museum. They had some really interesting contemporary art on the 4th floor, but the modern art on the 5th floor was not as great (though it’s completely subjective). The Pompidou is not a must, though you can pay just 3 euros just to check out the view. You can get some decent lower city views from the 5th floor balcony area, though it’s all windowed off so the pictures don’t turn out that great, and it’s not a 360-degree view. 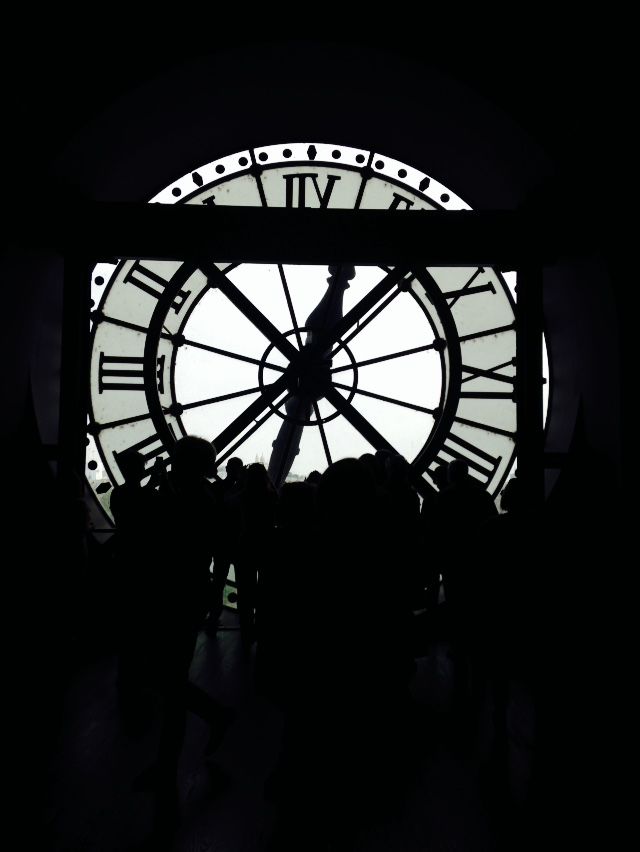 Clock face, Orsay Museum
The Orsay is a reasonably sized museum with tons of impressionism art to check out. We went around 10am and there was no queue for those with a museum pass. They have some cafes with good croissants and strange line up systems that always confuse the travellers. 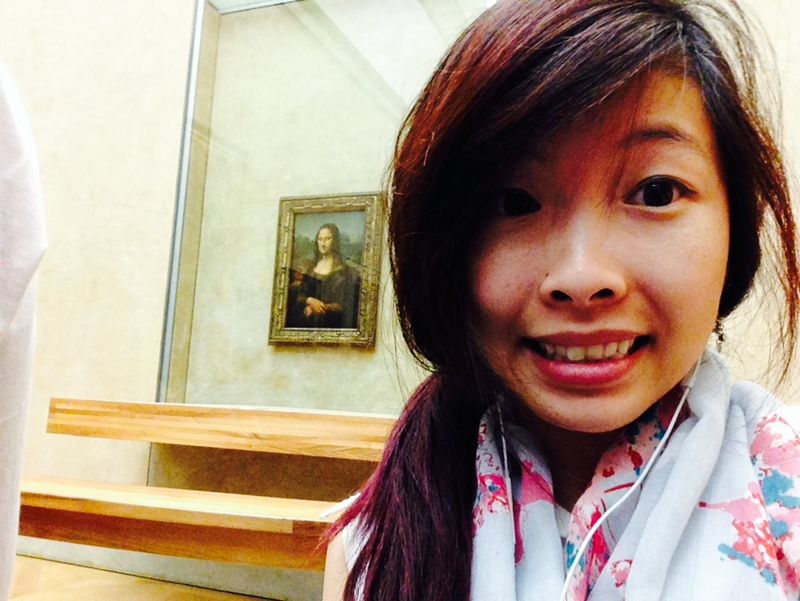 Selfie with the Mona Lisa, Louvre
We went to The Louvre around 7pm as they close later on Wednesdays & Fridays. There was still a ton of people though. The Louvre is gigantic - we probably only explored ⅓ of the exhibitions. The audio tour repeated a lot of the Italian art which we heard about in Italy. The Mona Lisa was smaller than I expected, haha.
The Louvre and Orsay are must see museums if you are at least a little bit into art or history. The one thing to note about all these museums is that they tend to only display French descriptions by each piece of art, so it’s a little more difficult to appreciate (compared to the other museums we went to in the previous countries). 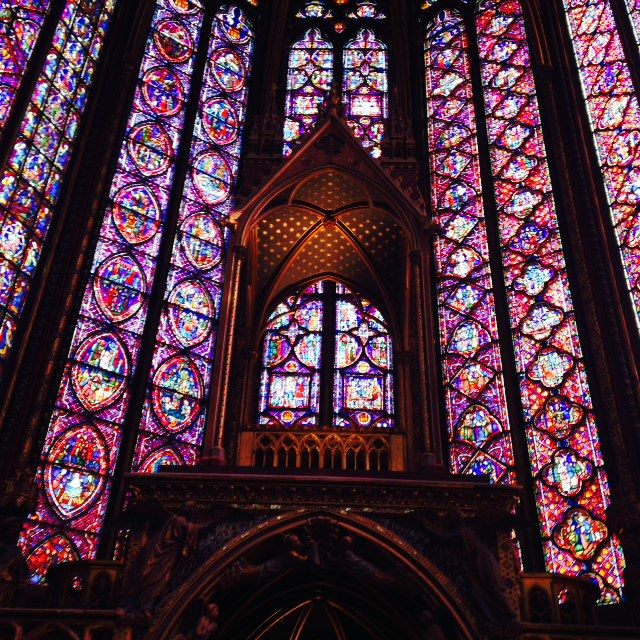 Stained glass windows, Saint Chapelle chapel
Saint Chapelle has beautiful stained glass windows seen from the interior. We waited a little bit over an hour to get in (arrived at 3pm), but only spent 30 mins inside. The security process is very slow which is why we had to wait so long. The Notre Dame Cathedral is another sight with stained glass windows (not as nice as Saint Chapelle) but we got in very quickly. It’s free to enter, though you can take a tour which we opted out from.
We also saw the Conciergerie as it was right beside Saint Chapelle, practically no line at all. It was basically the prison for Marie Antoinette and some other rich people. There was some interesting history to it, though definitely not a must see.
Arc de Triomphe: climb up tons of stairs to see an awesome, non-windowed 360-degree view of the city. We went for the sunset & night view. It was mostly for Eiffel Tower light show, which BTW will happen at 10pm even though it doesn’t turn completely dark yet during the summer. The light show is awesome, lasts about 2 minutes and happens every hour on the hour. The Arc is gigantic and very perfectly aligned with the Champ Elysees, the touristy boulevard that leads to the Arc. We thought the stair climbing would be tiring but honestly it wasn’t that bad (especially since we climbed up 5 floors to our Airbnb flat every night). This sight is definitely a must. 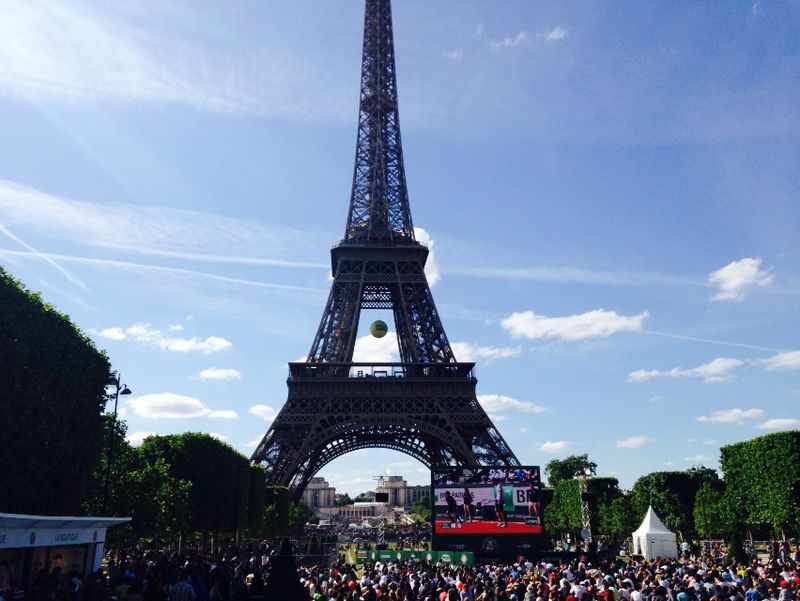 Daytime view of Eiffel Tower, with a crowd watching the French open
Eiffel Tower: the one, the only. This tower is actually kind of far away from the city centre. It’s also very short in real life (especially when seen from distances like the Pont des Arts). We went during day time. There is a large field where you can hang out and view the tower. The French open was happening so they put up a giant screen for locals to watch while drinking beer & wine. We didn’t plan to go up the tower (looked like there were large lineups), and plus, why would you want to get a city view without the Eiffel Tower? Many people recommend going up the Montparnasse tower to get cityspace views, though we never had time to go there.
Speaking of the Pont des Arts, they finally removed the love locks (right after we left). The bridge looked pretty sad and tacky with all those locks. I’m glad they’ve removed them.
There are also a number of gardens scattered throughout Paris. We went to a well-known garden called Jardin du Luxemburg, a lovely stop where we sampled our macaron haul from Sadaharu Aoki and Pierre Herme (Like clothing brand names, there are macaron and sweet shop brand names). 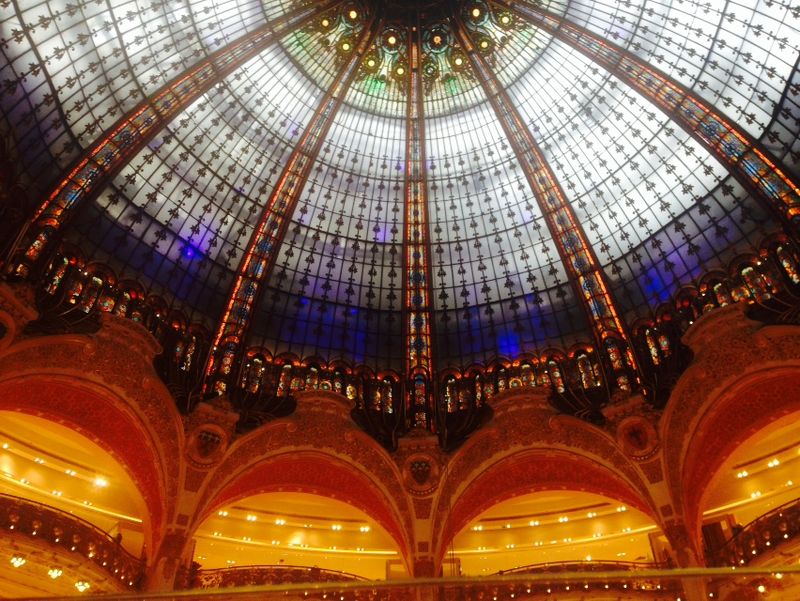 Looking up from within Galeries Lafayette department store
Galeries Lafayette is a large department store north of the city centre, which is also in the shopping district. It was a nice stop on the way to Sacre Coeur in the Montmatre area. There’s a nice stained glass dome to gaze up to when you’re inside (better views on the 2nd or 3rd floors). Sacre Coeur is a basilica on top of a large hilly area called Montmatre (reminded us of San Francisco as we climbed up to it). You can get some good lower city views as well as lovely sunsets from sitting on the steps by the basilica, though I think Arc de Triomphe had better views.
Beyond wanting 2 more full days so our schedule could be more relaxed, I enjoyed our time in Paris and can’t wait to go back.
comments powered by Disqus