Switzerland - a small country with 4 official languages. The one thing we noticed very quickly was that food and transit is pretty expensive in Switzerland. We ate out 90% of the time in Italy, and the prices were cheap in comparison. Austria & Germany were reasonable, very similar to North America. Switzerland is on the higher end of the scale. Apparently since the market is smaller, oligopolies make the most sense for Swiss industries. And because of the high prices, minimum wage is 20 fr/hour. I guess this is fine for citizens, but it’s tough for travellers on a budget.
We are doing 2 days/3 nights in Lucerne and 3 days/3 nights in Interlaken. The trains and metro cost quite a bit. About 2.70 for a short trip. It was 4 for 1 way to our Lucerne Airbnb from the station because it was in a different zone. We missed the days of taking Rome metro (for the entire city) for just 1.50 euros. In hindsight, we probably could have saved money by getting a Swiss pass, but we simply didn’t do enough research.
With regards to food, we chose to live the hard knock student life - eating instant noodles, bread, jam, cold cut meats, and muffins bought from the major grocery stores (Coop and Migros) because everything else was very pricey. We were also limited in food choices because our Airbnbs didn’t have kitchen facilities available, only water boilers and limited utensils/plates. 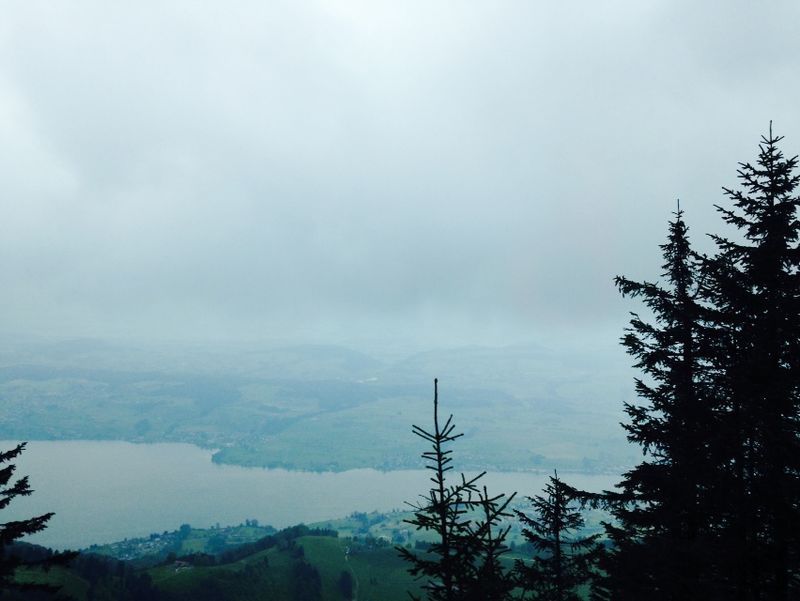 Foggy views seen from the funicular heading up to Mt. Rigi
The forecasts for our stay were cloudy + rainy for the most part. In Lucerne, if it’s too overcast or foggy, the mountains are not visible. We saw the mountains 50% of the time. We planned to go up to Mt. Rigi & Mt. Pilatus. We ended up only going up to Rigi (which we were skeptical about, but still went since our Airbnb host was able to buy us discount tickets). Going to the base Rigi is a nice cruise-like boat ride there & back. Unfortunately it was just way too foggy up there, it was pretty much a 50 meter visibility. 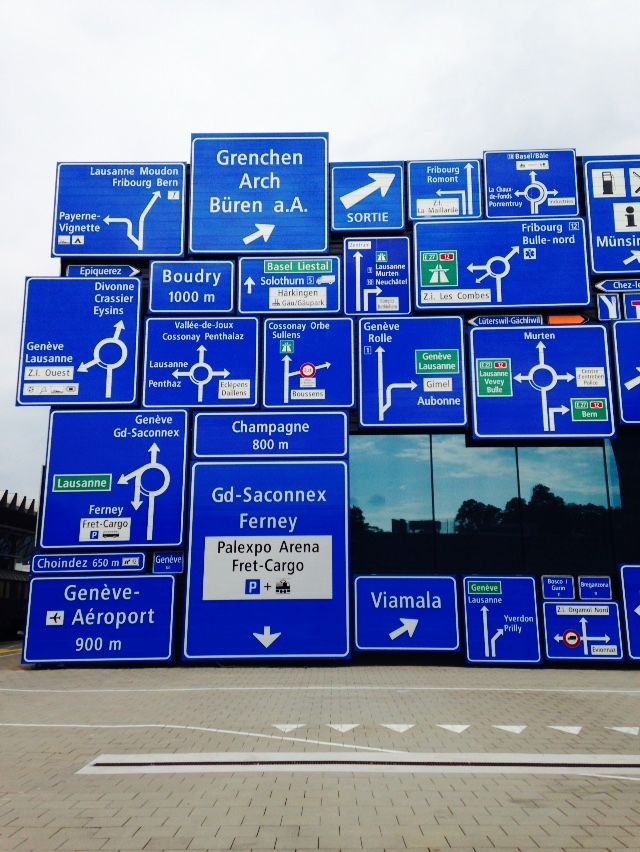 So many places, so little time! @ Museum of Transport
The rest of that day, we finished exploring Lucerne. We checked out the Lion Monument, which has an interesting story behind it. Nearbyis the Glacier Museum, though we weren’t willing to pay for admission haha.We then headed to the Museum of Transport, which was actually really cool and had a ton of exhibits. It seemed more like a gigantic playground for kids, though, and there was very little staff supervising the buildings (we pretty much got in for free because of the lack of monitoring). 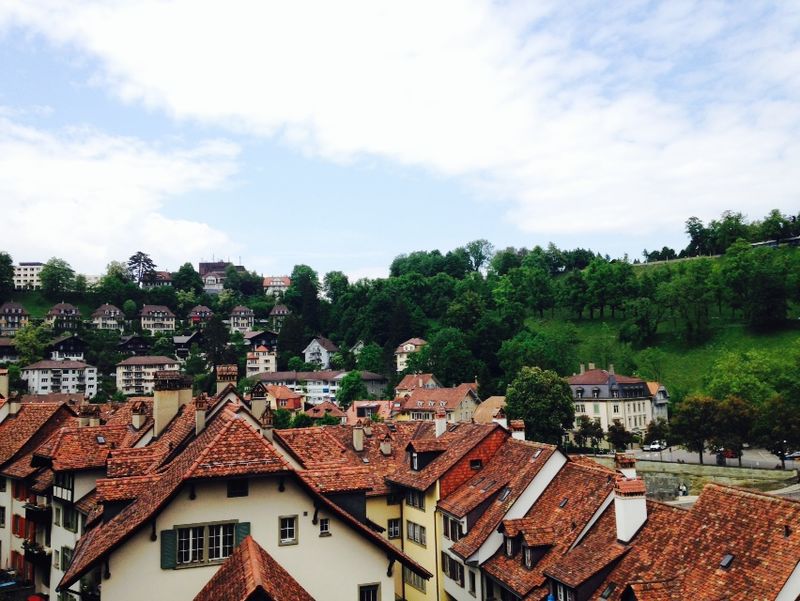 Cityscape of Bern
On the 2nd day we went to the city of Bern (capital of Switzerland) since it had a better forecast. We almost weren’t going to go because it was 72 francs roundtrip despite it only being an hour ride (expensive). We walked the entire city - hiking up Gurten, a large hill for decent city views. We also walked around the Old Town, saw their flower garden, and went to pretty much all the free scenic lookouts, easily planned out by use of Foursquare. Unfortunately there aren’t any mountain views visible from Bern, ah well.
I bought better walking shoes back in Munich in preparation for all the hikes, especially in case of wet weather. So far it’s been well worth the money.
We did eventually treat ourselves in Lucerne to a nice meal at a Swiss restaurant (Pfistern for those interested). I had a ratatouille pasta, which was actually very good and filling. Bread seems to be free in Switzerland, although water is not any cheaper despite being surrounded by Swiss Alps. 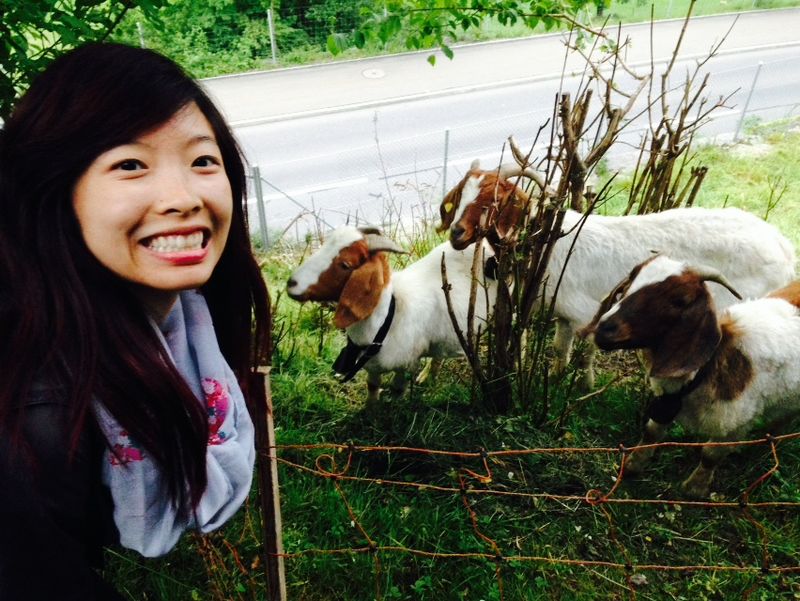 Met the neighbors
Our Airbnb was in a guest house, located separate from the host’s house. A neighboring farm faced our guest house, so we basically lived beside goats.
We soon realized that Switzerland has an even higher standard of cleanliness than Germany & Austria. We would take trains with bathrooms that were so clean and fresh smelling, that had hand dryers. That’s something you can’t even get on an airplane bathroom. Second class cabins was like first class cabins for Italy. 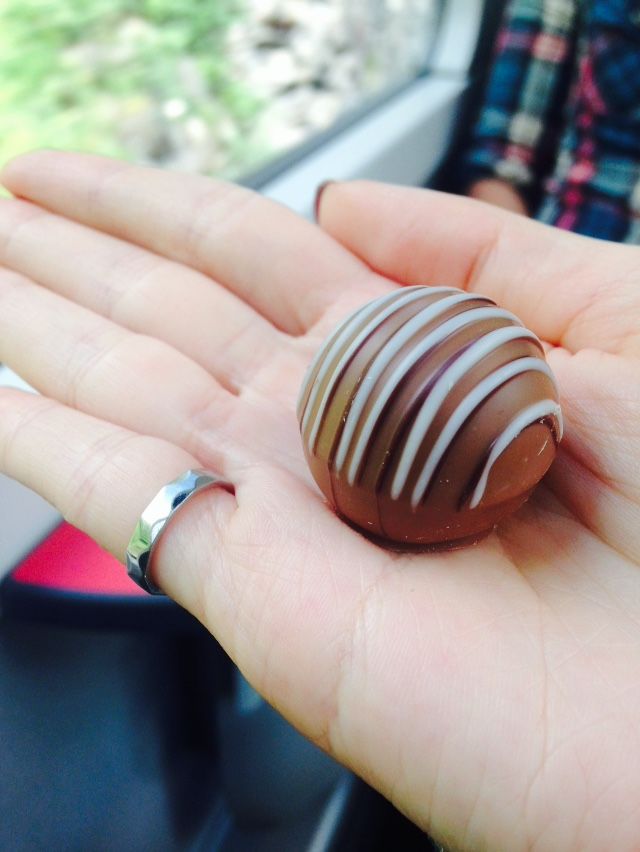 Milk choco w/ Bailey’s filling @ Laderach Chocolatier
We tried some Swiss chocolate - though we are not chocolate connoisseurs so did not taste the difference from typical North American brands. The Swiss are also known for their cheese fondue, though we’ve decided to skip that entirely as well due to the priciness (tends to be ~30 fr/person).
Interlaken was a lovely town. It sits between two lakes (given the literal name), and is a mountain town. The train ride there was gorgeous, especially because the forecast was partly cloudy. You can see the mountains from pretty much anywhere in the city. Our host provided us with a visitor card, allowing us to take the bus for free within Interlaken and get discounts for various sights. A pretty good deal, given that the sights and cable car rides are also pretty pricey. Switzerland doesn’t really do student discounts like Italy, Austria, and Germany did :( They provide free wifi on the public yellow buses when you sign up with your phone number, though, which we found very nice. 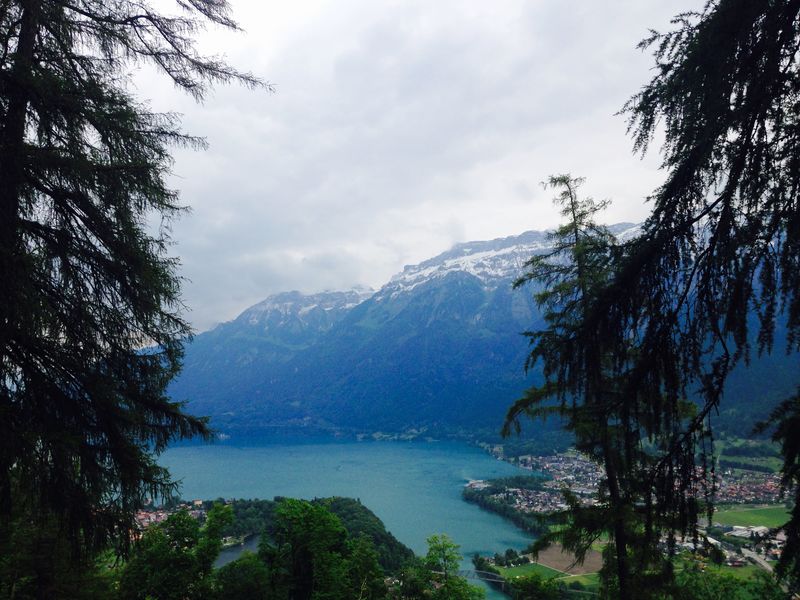 On the hike up to Harder Kulm, Interlaken
We decided to do a hike up to Harder Kulm the first day to take advantage of the better weather. It took about 2 hours. We both weren’t expecting it to be such a long hike. Because we are amateur hikers, we took many breaks. We noticed that local hikers always said hello to us as they passed by us on the trails. Some even gave tips to us for how much longer to the top, or which paths to take. We also ran into other friendly travellers - a lot of fellow Canadians.
The views at the top were wonderful and well worth the tough hike. We rewarded ourselves with our second meal in Switzerland. We had schnitzel, a burger, and beer as we enjoyed the views of the surrounding mountains as we sat beside the edge of the walls by the viewpoint. Most tourists take the funicular up and down, but I highly recommend doing the hike. There are a number of viewpoints that are excellent, if not better than the one at the top.
The next two days were supposed to be rainy. Our original plan was to go to Gimmelwald (as recommended by Rick Steves), which we opted for the Trummelbach falls as the plan B. After doing some extensive research, and noticing that it would not rain until around 3pm, we decided to go to Gimmelwald anyway (plus, the falls were on the way so we thought we could see both in one day). Transit is very straightforward in Switzerland. The trains to go to these tourist locations operate very frequently,too, even on a holiday (we went on Pentecost Monday). 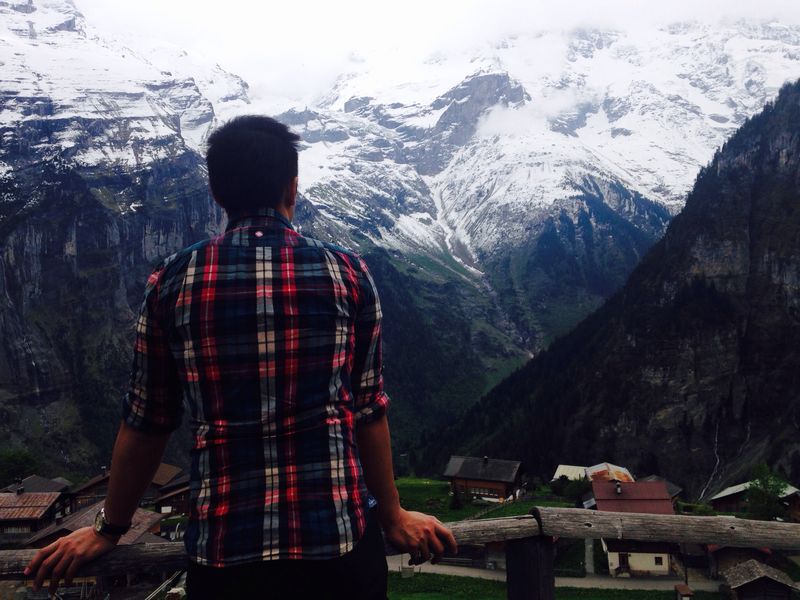 Overlooking Grimmelwald below, and Schwarzmonch cliffs above
We were very fortunate to have partly cloudy skies as we reached Gimmelwald. We had the village to ourselves because most tourists continued on their cable car to Murren, another village a bit further up. Because of that, it was very peaceful and quiet. Gimmelwald a village of about 100 residents. As it’s located so high in elevation, you can see the snow capped mountains clearly, and it was pretty warm as we climbed up and down the hills. We also witnessed a small avalanche happening on a nearby mountain. According to the locals, the views are much nicer when it’s sunny. It was already beautiful when overcast, so I’d recommend to still check this place out if it isn’t sunny.
The weather forecast was pretty accurate. It started to rain around 4. By that time we were already heading into the falls. These powerful falls come from glaciers on the 3 main mountains in the area (one of which is Jungfrau, the top of Europe). This sight is skippable, especially if you’ve seen Niagara Falls, but still pretty impressive. There are tons of mini waterfalls on the surrounding mountains. 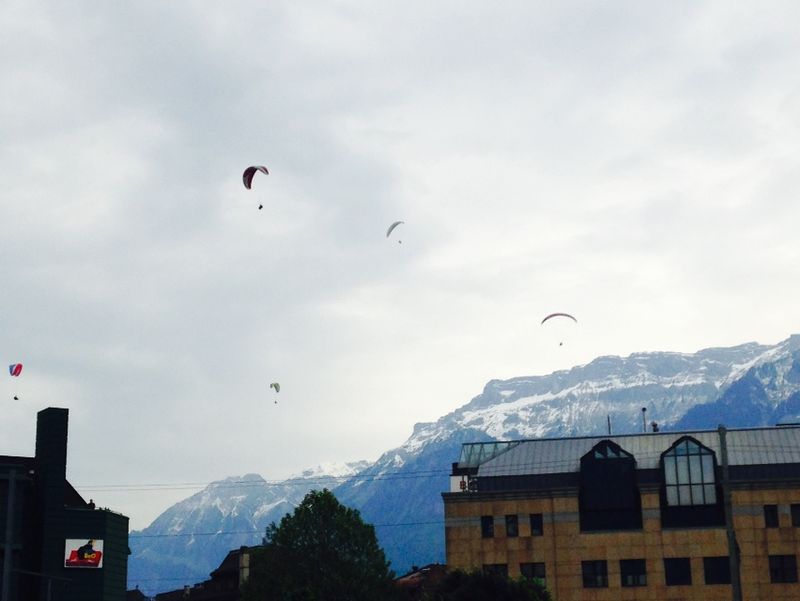 Paragliders soaring above Interlaken
Interlaken is a more tourist friendly city in comparison to Lucerne. It’s a more walkable city, and it seemed like the food prices were more reasonable (though maybe we were just getting used to Switzerland in general). There are even fun (and expensive) activities such as hanggliding & paragliding. These activities were not in our budget (plus the weather wasn’t going to be the greatest). We noticed that there are a ton of Indian tour groups that go to Switzerland. We saw no Indian tour groups in the other countries visited so far, so it was surprising. We are also surprised by the high number of Koreans who travel on their own (rather than tour groups). There must be some Korean source that is encouraging it. 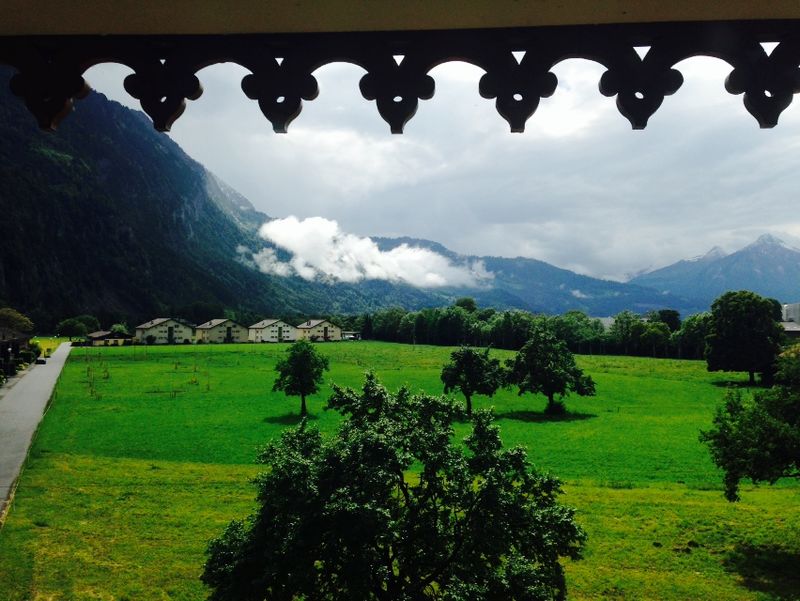 Splendid views from our Airbnb flat
Today is our last day in Interlaken (and in Switzerland). Because it is supposed to rain all day (and we have just 20 fr left to spend) we plan to relax at home, watch movies, plan our next few cities, etc. Our Airbnb room (with the walls filled with windows) gives us amazing views of nearby mountains. Watching the weather enfold throughout the day is quite a wonder, especially in a mountain town like this. We surfed on our laptops while it went from foggy -> overcast -> sunny -> overcast again -> sunny (it hasn't actually rained yet). It’s like watching a movie enfold. This view is exactly how we imagined Switzerland - it’s such a privilege to see.
I hope to come back to Switzerland again during the summer season for clearer, sunnier views, probably stay in Interlaken or in a nearby area again (because Lucerne wasn’t as good), and head up to Jungfrau (named the Top of Europe). Maybe in a few decades when I have the money for it.
comments powered by Disqus