Environment
As soon as we stepped out onto the streets of Florence, we noticed that the city was very tourist friendly. There was a lot of space for pedestrians and much less traffic. There is even room for babies in strollers. Florence is also cleaner than Rome, although there was still graffiti present in a few areas.
In many ways, Florence is like San Francisco. It’s much more relaxed and chill compared to Rome. We stayed in an area called Santo Spirito, a lively area that many young people like to flock to, especially on weekend nights. The Piazza on a Friday night felt like Dolores Park in SF - drunk people everywhere and people walking their dogs (at night with their friends for whatever reason). Florence seems like a more tourist friendly city, especially as we heard a lot more English speakers than in Rome. Even Italians themselves like travel to Florence for vacation purposes. Many exchange students go to Florence to study the art, which also explains the abundance of young tourists. 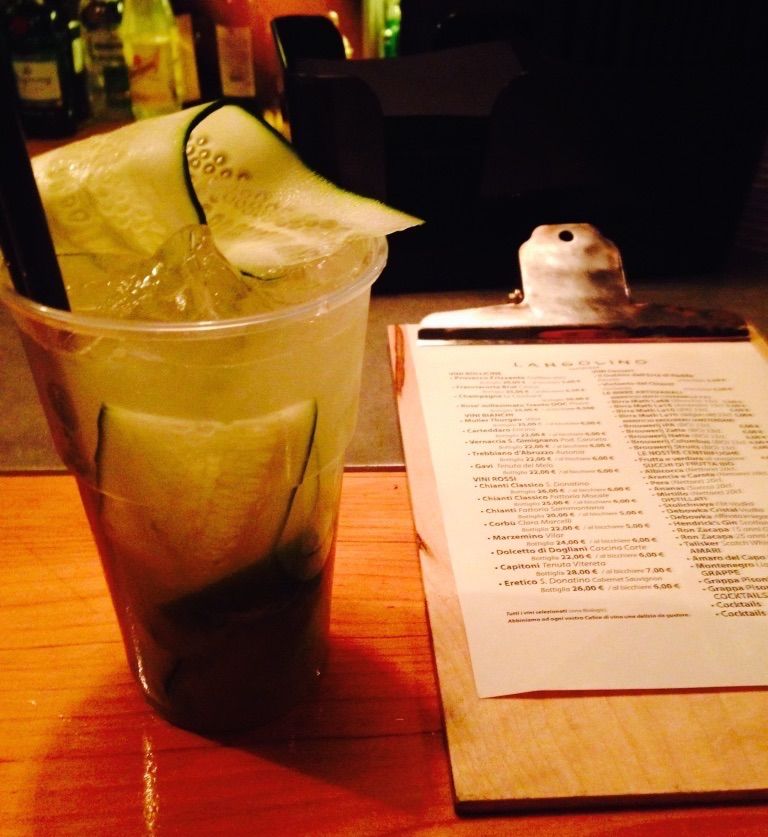 Refreshing cocktail from Langolino Gastrobar Firenze
The weather was also perfect - not too hot and not too cool. Also, thereisn’t much humidity when it comes to Italy - it stays pretty warm and dry during the summer seasons.
Food
You have to pay for water when eating a sit down meal in Italy (and it’s the same for various other European countries). They’ll ask if you want still or sparking water. It can be anywhere between 1.50 to 6 euros. It’s usually a 750mL bottle, but we’ve gotten small 300mL bottles as well. You can always ask for wine instead if you’d like :) Also, for any sit down place, they will give you bread without asking - but usually it’s not complementary, and it’s typically rude not to accept it. You could think of these “extra" charges as the “tip", as you don’t need to tip in Italy.
We were also quite surprised by the fact that dinner tends to start around 8pm for Italians (for lunch, it is 1230). They enforce this pretty well. Even restaurants that open at 730 - you will never see any locals come that early. 830 is actually the norm. We actually went to a Michelin star restaurant the other day - an 8pm reservation. No other groups arrived there until ~830-9pm. (We almost thought it was a tourist trap until we realized how “early" we were haha). 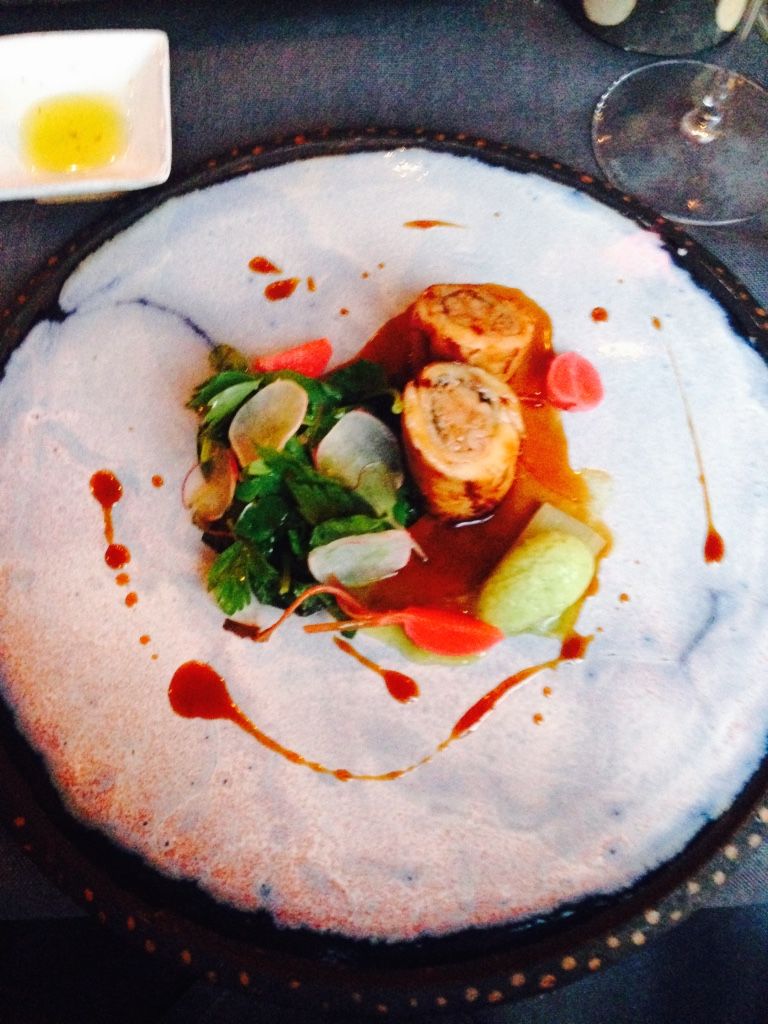 Rabbit antipasti at our 1 Michelin Star restaurant
The Michelin Star restaurant (called Della La Bottega Del Buon Caffe) was not bad. It reminded us of our experience at Heirloom Cafe (in the Mission of San Francisco). Very eccentric tastes from the dishes presented to us. We decided to get a la carte despite the popularity with the 6 course meal, and also being new grads in their 20s, we wanted to be cheap. What was nice was that we were able to taste a mixture of plates instead of getting the standard meal. We got quite a few complementary starters, as well as complementary dessert. I’ll leave out the details for my Yelp review, but overall it was a refreshing experience from the high amount of rich meats, pastas, paninis, and pizza we’ve been munching on.
Transit
We got to Florence by Train with ItaliaRail. Because we booked the tickets early, we were able to get first class seats for a pretty decent price. First class was relaxing and quiet, with some seats unfilled in our carriage. You also get complimentary drinks and a ton of luggage room.
Florence itself can be explored entirely by foot. It’s a small city. Busses exist but they are fairly small (quite adorable). We are now leaving Florence to Venice by ItaliaRail, this time in second class. The seating isn’t as nice and it’s a bit noisier as seating is completelyfilled up. It reminds me of a typical airplane ride in economy class (except on flat land of course). There’s a snack bar in the next carriage. The window scenery so far is mostly large fields and passing through a couple of cities (incl. Bologna).
Sites 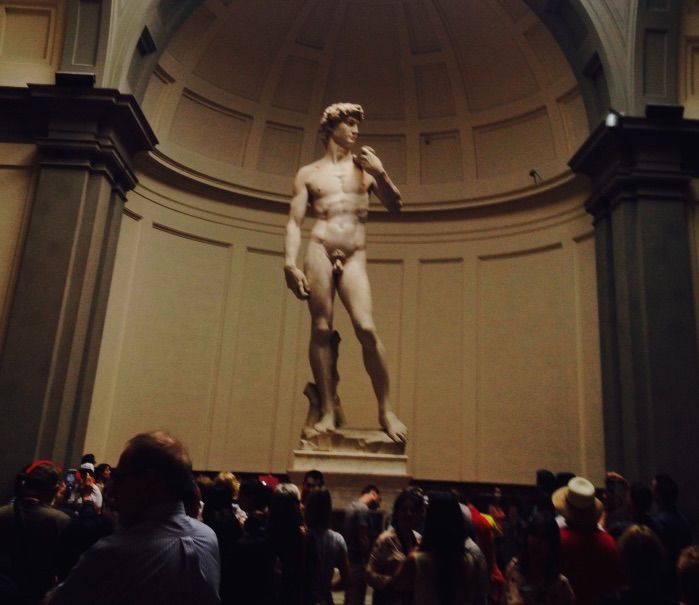 Statue of David by Michelangelo
Florence is much less crowded than Rome; there were also very few tour groups. The Accademia (which has the real David statue) and Uffizi Gallery are must-sees, with some great Rick Steves audio guides. We thought the Pitti Palace wasn’t that great. There was a ton of art cluttered across every wall in every room. Without a guide, it was tough to stay interested. Unfortunately we got the wrong museum tickets and could not enter Boboli Gardens despite us residing so close to them. Due to the lack of crowds, we concluded that it wasn’t worth it anyway. 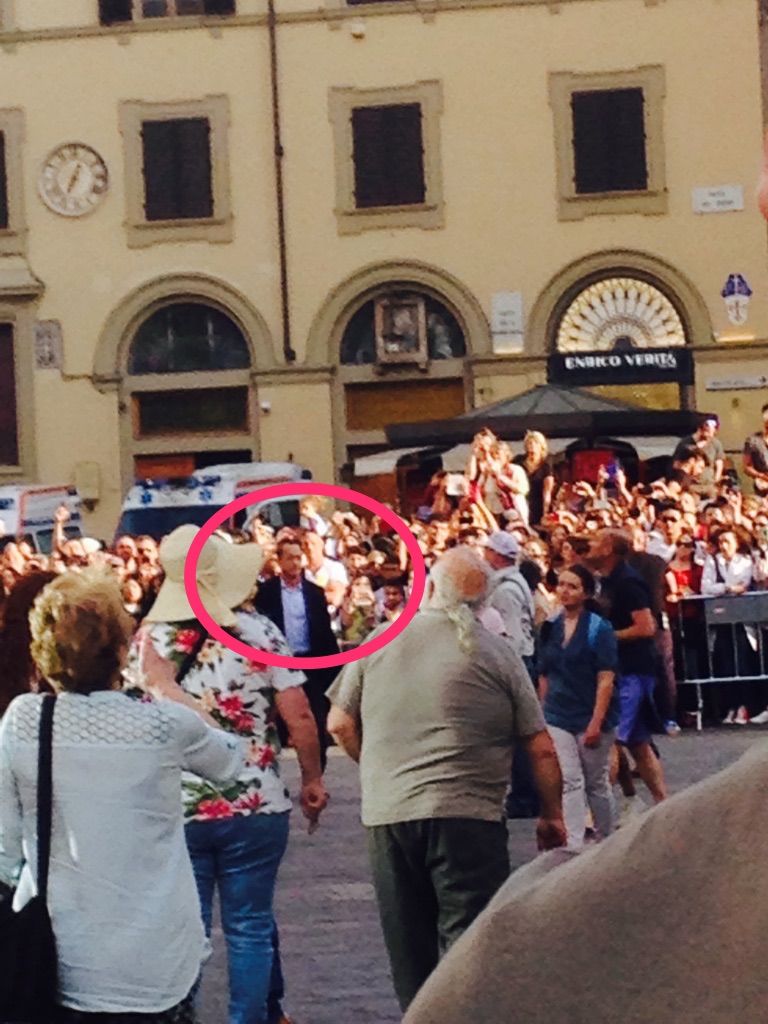 Tom Hanks through the sea of fake tourists
Other than that, there’s the Duomo and beside it the octagonal Battistero di San Giovanni. We very coincidentally came to Florence during the week that Ron Howards & crew were shooting the film, Inferno. We got to see Tom Hanks on a couple of occasions walking through a crowd of fake tourists between the Duomo and Battistero. It was hilarious to see how they depicted tourists: hats, selfie sticks, running shoes, sunglasses. 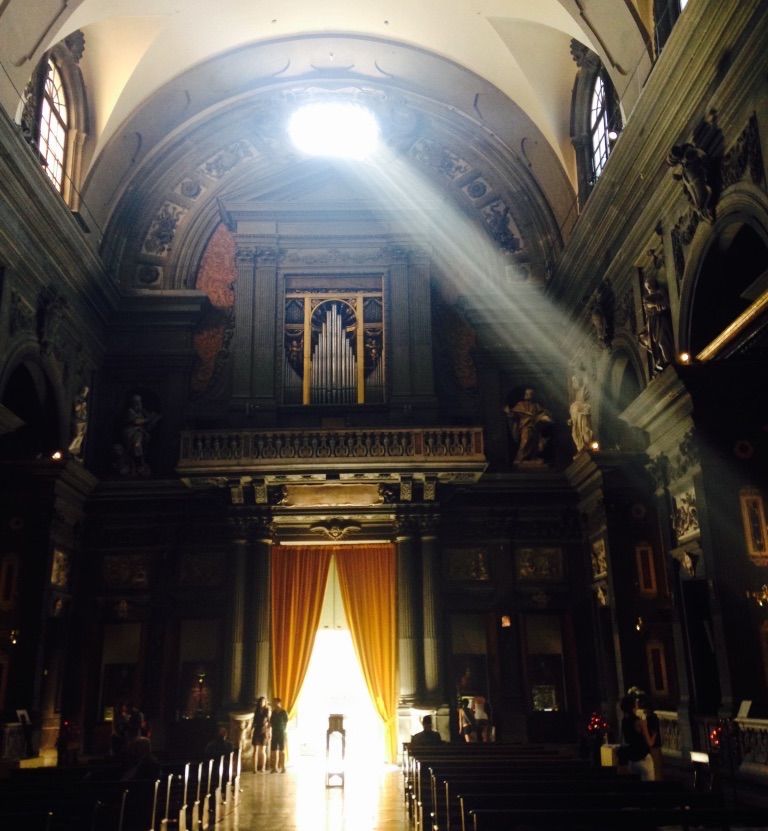 Anonymous basilica in Florence
There are an endless amount of churches & basilicas to see. Most of them are grand and beautiful, full of history.
Shopping
Speaking of selfie sticks: Rome had a TON of selfie stick sellers. And everyone bought them, too! It’s your typical Monopod brand, though the ones being sold have the headphone jack attached so you don’t need to purchase the extra bluetooth button. Florence had a few sellers, too, but they were not as aggressive as the Rome sellers who literally pointed them in your faces “Selfie? I can give you discount".
We didn’t get a chance to do any shopping in Rome (which would be located near the Spanish Steps), but shopping is a lot more welcoming in Florence - the reason, again, being that vendors are much less aggressive.
Overall Florence was a nice relaxing stop on our 9-city journey and I’d recommend it to those who are looking for a laid back experience.
comments powered by Disqus